Posted on November 7, 2014 by Brian Williamson

Hewing is not much practiced nowadays: a little bit for fun and the occasional piece of restoration work, I guess. Certainly, although I do a lot of axeing and a bit of adzing, it’s something I’d not turned my hand to before.

So the opportunity to be involved in hewing five of the longest clear-span beams in the country was one that was too good to miss.

There has been a lot of work going on in the Arboretum at Westonbirt, recently as part of their re-development program. A late part of this is the construction of a new building to house the Tree Team and all their equipment, from chainsaws to tractors. And, largely because it could be done, I suspect, this was going to incorporate five beams spanning sixty clear feet. Now that is a span! Pace it out and see how long it is in comparison to your house. 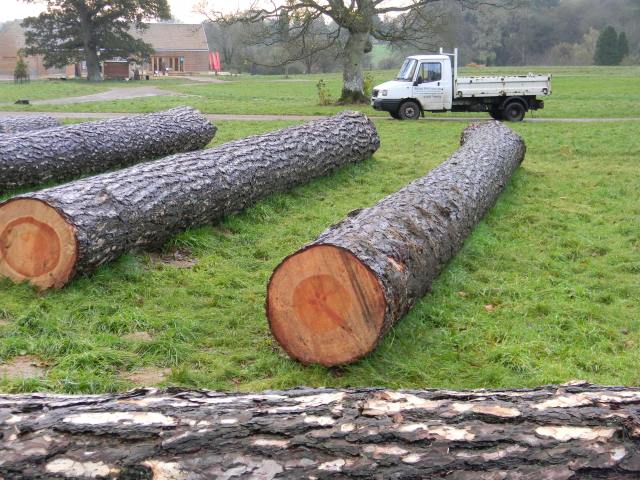 The timber all came from within the Arboretum, part of a small plantation of pines made back in it’s early days by the Holfords in the 1870’s. The trees were moved, with some difficulty, set up together side-by-side and squared on the two side faces with a chainsaw mill. They were then levelled across this face (no need to do it along their length)and were ready to go

A group of twelve hewers of varying abilities then spent two days working on, what would be, the top and bottom faces.

Here, some of the team are busy notching in to the chalk lines and then splitting off the blocks of wood in between the notches: 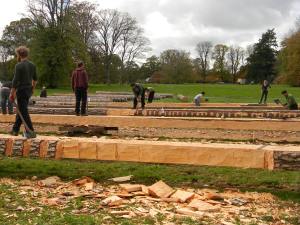 This photo shows me in action on this phase of the work, working with a standard pattern felling axe:

Splitting off the blocks between the notches.

And Joel Hendry at work with the broad axe. Note both the angle of the ‘cut’ he is working and its length: 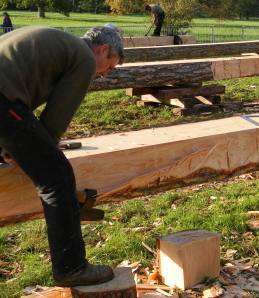 Finishing off with broad axe.

People tend to assume that axe work will be rather crude. In fact, it can be as good (some would argue better) than adzed work and it is actually the former, rather than the latter, that one usually sees on old timbers. 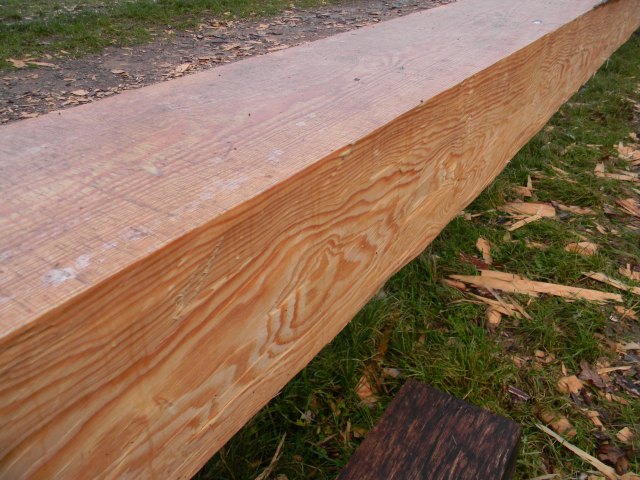 Posted on August 3, 2013 by Brian Williamson

I’ve spent the past week working on the roof of a newly built, cruck-framed, barn in the Oxford University Arboretum.

It was built over a number of short courses by students under the tuitilage of Henry Russell and Barbara Czoch (and probably a couple of others who are unknown tome but deserve credit). And its a very lovely assembly of curving timbers and organic design: 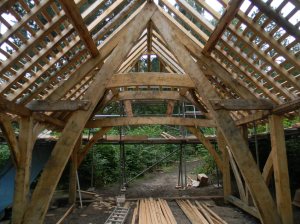 This roof has been given ‘sprockets’; bolt-ons at the end of the rafters to lower the angle of the roof as it reaches the eaves.

And this is how they can be of benefit:

As demonstrated by my colleague, Ruth!

Cleaving – a game of two halves

The basic purpose of cleaving is to divide your billet/pole/log into two equal pieces longitudinally. So you divide the one into two; the two into four, the four into eight and so on. In theory the process is infinite. In practice, of course, much less so.

When you’re dealing with a round the process is pretty straight forward. Strike a line through its heart that will divide it into two equal halves. If there are visible knots or other defects, it will probably be best to position your dividing line so that the your split does not have to run through them. So:

When breaking the half down into its quarters, again it is straight forward:

And, again, the quarters into eights:

In each case above, you have been dividing your piece into two of equal size and similar shape. But what happens when your shapes are very dissimilar? In the example below, the two areas (and therefore masses) are the same, but the shapes are very different:

And this is what happens when you start the split: 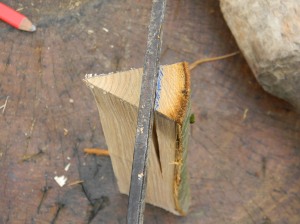 finishing up as below:

So why is this? The surface areas were the same. The masses were the same. The difference lies in the relative stiffness of the two pieces. If you try flexing a ruler, it will bend easily when held flat but be almost impossible to bend when held on edge.
So you have to adjust the start point of your cleft so that you have two pieces of wood of equal stiffness. Below, the cleft line has been moved in towards the heart (apologies for the loss of focus) :

And the result is two pieces of wood of unequal sizes where the cleft has run true (right hand pair): 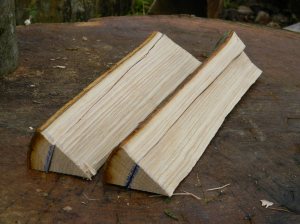 Where the heart is very asymetrical, your initial cleft into halves will run through the centre and give you two very similar shapes; but the subsequent clefts into ‘quarters’ will be very different: 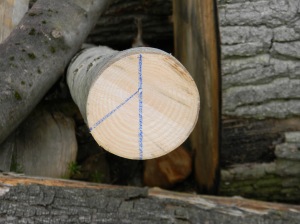 The basic aim of cleaving is to get two equal sized pieces of wood out of one original piece. However, there are refinements to this principle and three-way cleaving is one of them.

If halves are too large and quarters too small for your purpose, then thirds may be the way forward. This technique works well with sweet chestnut; will probably work with ash, but would be doubtful with oak (thought I admit to not having tried it on either ash or oak).

Firstly mark out your thirds, taking care that the split lines will miss the worst of any knots or other defects.

Start the splits. Note the angle of the blade. It is important that the splits do not run beyond the centre of the pole, and angling the blades helps this. 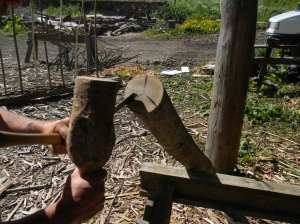 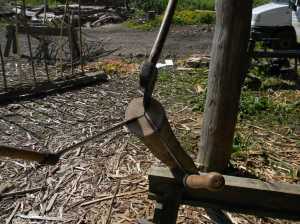 Close up. The three splits meet nicely in the middle. 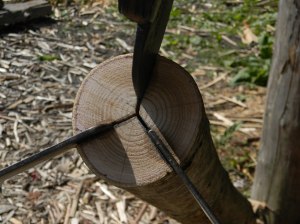 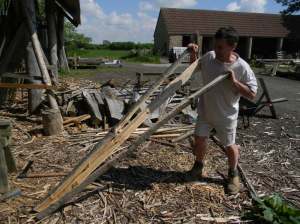 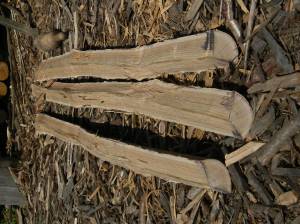 Had an interesting few days last week taking our little oak frame up to the Grand Designs Exhibition at the Birmingham NEC. 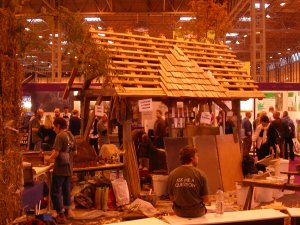 We were on a stand donated by the Grand Designs and managed by LILI (Low Impact Living Initiative) and shared by a variety of alternative technologies – cob and straw bale building, bee keeping and clay bread ovens, solar panels and (of course) wood and timber use.

It was a great opportunity to put a wide range of sustainable technologies before a (possibly) appreciative and certainly very large audience. Good opportunities for networking with other participants as well. Whether we managed to generate any work from it remains to be seen.

Negotiations are ongoing between LILI and the Grand Designs team about making it more sustainable for us.